The exact acts will be posted in December 2022.
History and General Information

With the City’s Tricentennial Eve Celebration of 300 years on December 31, 1998 Falls Church unknowingly began a tradition that is now in its 23 year.  We had to skip December 2020 and now 2021 due to COVID, but we are now back.  In 1998, people wanted more events in our downtown with the streets closed and fun activities and live music.  Watch Night was born. Neither snow, nor rain, or cold has stopped Watch Night these many years.  Seeing the Historic Star (the City’s first holiday decoration from 1948) lowered each year since 2007 delights Watch Night guests and provides the close to this unique community celebration at midnight.  Atlantic Realty annually sponsors the crane and operator for the lowering of the star.  Not First Night, which is a NYE event franchise and has tickets for purchase, Watch Night is free and open to all.  Fueled by donations from area businesses, civic and nonprofit organizations, and run by non-profits, and volunteer organizations who raisie the money annually to put on this event.

The locations/venues include The Grand Fun Alley which is located between Park Avenue, and the 100 block of West Broad St.  The 100 Block of W. Broad Street closes at 5 pm for set up of the event.   For 2022 the Grand Fun Alley will have Rock Climbing Wall including, Obstacle Courses, Mechanical Baby Shark and more

The outdoor stage on W Broad Street will feature – Blue Ridge Sky Band  – and Jameson Green – both great groups with plenty of rock from the 1980’w to present hits. This venue is suround by restaurants.

The Falls Church Historic Church (115 East Fairfax Street) is hosting free tours of the historic (1762) church that was witness to the Revolutionary War – and again served in the Civil War.  It is rich with history – and only open for tours on Watch Night.  (Tours start at 7 pm ) .  Performing in another venue of the church is local legend Andrew Acosta and the Electric Band (8pm to 10 pm). The give a great musical performance.

Fireplaces and Firepits sponsored by Sisler’s Stone of Falls Church will serve as a warming stations throughout the Watch Night area.

Given the popularity and uniqueness of the music offerings at the indoor music venues, at the Presbyterian Church and historic The Falls Church, Watch Night is introducing the creative 20kv and Antoinette – and interactive performance for children and adults (7 pm to 8:15 pm) followed by the very popular Big Band sound of Northern Lights Dance Band Orchestra (8:15 to 10:15 pm) where the swing music and 20-piece orchestra gets people dancing!   Cookies and Hot Apple Cider will be available until the supply runs out.  Several activities at this venue include Puppet Shows, face painter and you in Victorian attire available from 7 pm – 9 pm.

The LOVE letters artwork sponsored by Atlantic Realty and The Little City CATCH Foundation, Virginia is for Lovers, VIRGINIA TOURISM CORPORATION will be in place on the corner of S. Washington and West Broad Street,  beginning December 27  through the new year  with  pick up  on January 2nd.  Community Volunteers are available for taking photos with the use of visitor’s cellphones to take photographs of their families and friends at The LOVE artwork all evening until 11:30 pm as well as before and after the event when y0u can have your photo taken any time you please, just be sure to have a friend with you to take photos.

Special thanks to the LEAD SPONSORS  for this year’s Watch Night:  The City of Falls Church, The Little City CATCH Foundation and SPONSORS New Editions Consulting, The Village Preservation and Improvement Society; and Atlantic Realty, The Kensington Senior Living – and Doctors Love and Miller – Dentistry.

Among the Host Supporters are Foxes Music, Burke and Herbert Bank, June Beyer Art, Sisler’s Stone, VIGET,   WATCH NIGHT could not continue without the financial support of Contributors: Cue Studios, Jeff Jeffrey and A&A Auto Services Steward and Karen Gould, and other Friends of Watch Night who donate through the home page on the Watch Night Falls Church website, www.watchnightfallschurch.com

The overall success of the event is due to the wide variety of business and civic group donations of time, money, resources, and our area churches who loan Watch Night organizers the indoor space so there are indoor alternatives.  The local civic organizations, churches, and non-profits who not only donate, but recruit many volunteers that allow Watch Night to provide a free, fun, family experience unique New Year’s Eve experience – Watch Night Falls Church.

Festivities begin at 7 pm.  The Grand FunAlley is open at 7 pm see the hours and schedule for various entertainment at the other venues. As we near midnight crowds gather in front of the stage and in the entire 100 block in the closing thirty minutes to see the lowering of the Historic 12’ diameter Star at midnight and the rock to the great live music.

Watch Night was parented by the City of Falls Church Tricentennial Eve which was held December 31, 1998. The event was produced by the Tricentennial Committee that was established in 1995 to celebrate 300 years of Falls Church history. Streets were closed to traffic and traffic was diverted away from the crossroads of Route 7 and Route 29 providing a walkable venue for all of the amusements, music, and venue locations. At that time the main stage was at the crossroads of Washington and Broad Streets. In the current version, the City Police close just the 100 block of East Broad to North and South Maple, and the parking lot between Park Avenue and East Broad St serves as the Grand Fun Alley. The East Broad block leads to the East and North Fairfax Streets venues as well as those on North Maple Avenue That 1998 event was repeated following the big success of Tricentennial Eve and was later named WATCH NIGHT.

There were non-profit groups such as the Village Preservation and Improvement Society (VPIS), the Tinner Hill Foundation and the Victorian Society at Falls Church that help support Watch Night with its leadership and sponsorship of venues, donations of money, time, talent and in-kind donations.   In the early years, groups provided fiduciary resources for the donations to be collected and disbursed through their 501c3 accounts, The Village Preservation and Improvement Society was the first home of Watch Night for several years.  Later, The Tinner Hill Heritage Foundation (THHF) was asked if they would manage the administration and finances and they organized the Blues music at their tent on the Corner of S. Washington and Broad Street where the LOVE Letters are at Watch Night now, and also researched and procured talent for the Main Stage music entertainment for years.  Following the great success of the annual Tinner Hill Blues Festival, the decision was made by THHF to focus on that event and the mission of The Tinner Hill Heritage Foundation to advance the Tinner Hill African American Historical Trail and the Chamber of Commerce took the fiduciary responsibility for donations to Watch Night.  In 2007 the 501c3 application for The Little City CATCH Foundation was developed and submitted to the IRS so a permanent non-profit organization would be established to house Watch Night Falls Church, that celebrates the Arts, Theater, Culture and History of the City of Falls Church.

So, what is the Star drop at midnight about – what’s the story… 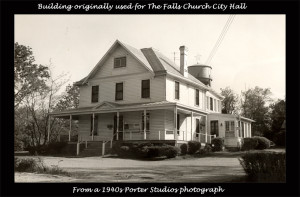 ‘THE STAR” on “the tower” behind 422 N. Washington Street will rise above the buildings of the City.

The photograph above has a lot going on as for as ‘firsts’ go.  This photo shows the “first City Hall”; the “first Water Tower” and the “first Holiday Decoration” in the newly organized City of Falls Church in 1948. The Water Tower was the first in a series of 10 used by the City and was erected in 1931 following a severe drought in 1930. It cost $8,210 to erect them at the time.

The “Star” had been illuminated every Christmas season since 1948, when the Town of Falls Church became a City. Built by Dixie Sheet Metal of Falls Church (which is still operating on Gordon Road in the City), and designed by local architect, Victor Spector. Don Frady and his Public Works crews hoisted and secured “the star” annually. Through the years it had reached iconic status and was missed after “the star” and “the tower” were removed to make room for the townhouse office development being constructed very close by. What happened to “the star”? So, one day Robert Goff pulled “the star” out of hiding.

The star represents those early days of being an official City.  Done in typical Falls Church style, with a meaningful and historic touch – so appropriate for , 70 years since “the star” was first high above the town. It will be raised and lowered again in at each Annual Watch Night event at Countdown on the Main Stage

Thanks to Robert Goff, and Guy Brady who did the refurbishment, Adam Schulman of Atlantic Realty who has helped to arrange and donate the crane and operator for the event every year since we first began the tradition of lowering the star in 2007.

“The Star has returned to service after a long retirement, and it feels good to have his small historical piece added to the NYE Event. New York has its Waterford Crystal Ball Drop and Falls Church is using an historical decoration for the same purpose, to welcome in the New Year”.

THE GUIDING PRINCIPLES OF WATCH NIGHT

The principles were constructed by Dave Eckert who started Watch Night after Tricentennial Eve had proven so successful.  Dave moved to Oregon with his wife Annette Mills in 2006.  He asked Barbara Cram to take it over and the rest is history, 13 years later we celebrate 22 years of Watch Night now an iconic event in the downtown of our Little City.

2. Fun for all ages and family friendly

3. Event is issue free, without political or social messages that may divide the community

4. Venues are organized and funded by local organizations, businesses and citizen contributions and manned by          citizen volunteers

5. Event is pedestrian friendly and organized so that citizens can walk safely and easily between venues

6. Supports local entertainers, artists and businesses with its venues

7. Managed on a budget that uses the resources of local businesses, government, organizations and individuals to reduce costs and build community

8. Organized to minimize overall administration and encourage focus on each venue by the various sponsoring organizations

9. WATCH NIGHT is an important part of the Falls Church City culture or Arts, Theater, Culture and History.

As Falls Church grows we urge those who are new to the City to become involved in civic organizations, service organizations, or one of our Arts and Humanities Council groups that contribute to the culture of our City, The Historic Commission,  Creative Cauldron, Falls Church Arts, The Tinner Hill Heritage Foundation, The Village Preservation and Improvement Society, The Falls Church City Schools, The Falls Church Chamber of Commerce, The Victorian Society at Falls Church, The Friends of Cherry Hill Foundation, The Little City CATCH Foundation Watch Night Committee whose members contribute to the Watch Night event.  These Arts and Humanities Council member organizations serve as an Advisory Council to City Council and through their own organization’s events throughout the years each group has contributed greatly to the culture of the City of Falls Church, some for many decades.

WN In The News

THE VILLAGE PRESERVATION AND IMPROVEMENT SOCIETY